Professor Tanja Bosak (Geobiology at MIT) participated in the Return Sample Science by the Preserverance rover and is a representative to the Project Science Group of the Mars 2020 mission. 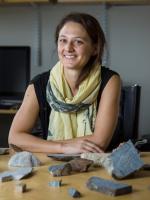 The Preseverance rover will land in Jerzero crater on Mars in February 2021 and search for signs of past microbial life and characterize the planet's climate and geology. This will be the first planetary mission to collect and cache samples of Martian rocks and soil. NASA and the European Space Agency are developing subsequent missions by the Mars Sample Return Campaign. These missions will send a fetch rover to Mars to collect the cached samples from the surface and another craft that will return them to Earth for in-depth analyses by Earth-based laboratories.
Tanja Bosak’s laboratory uses experimental geobiology to explore modern biogeochemical and sedimentological processes in microbial systems and interpret the record of life on the Early Earth. Tanja Bosak was born in Croatia and graduated from the Zagreb University with a degree in Geophysics. After a summer of research at JPL and a short stint as a meteorologist at the Zagreb Airport, she moved to the California Institute of Technology in Pasadena, where she studied signatures of microbial processes in ancient sedimentary rocks and earned a Ph.D. in Geobiology.

She spent two years at Harvard as a Microbial Initiative Postdoctoral Fellow, joined the Department of Earth, Atmospheric and Planetary Sciences at MIT in 2007 and is now a professor of Geobiology. She is one of ten scientists selected to participate in the Return Sample Science by the Perseverance rover and one of two representatives of this group to the Project Science Group of the Mars 2020 mission.
Date:  Tuesday, March 9, 2021
6:00 p.m. - 7:15 p.m.