On the 75th anniversary of the  Potsdam conference, Nancy will be interviewed by Emily S. Dietsch regarding her latest book. 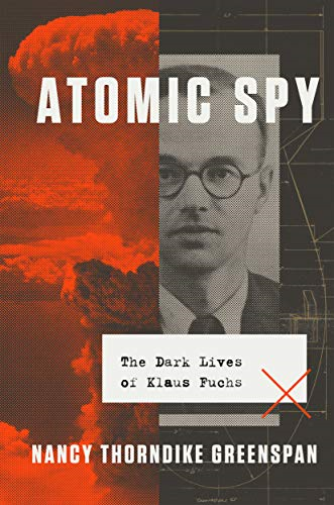 Exactly 75 years ago, on the evening of July 24, 1945 during the Potsdam conference, Truman approached Stalin without an interpreter and as casually as he could, told him that the United States had a "new weapon of unusual destructive force." To his utter surprise, Stalin showed little interest, replying only that he hoped the United States would make "good use of it against the Japanese." In the first salvo of the undeclared Cold War, a top British nuclear physicist had provided the Soviets with invaluable intelligence about the atomic bomb program. It would take even more years before the United States knew the trajectory of the post-war order had forever been altered.

German by birth, British by naturalization, Communist by conviction, Klaus Fuchs was a fearless Nazi resister, a brilliant scientist, and an infamous spy. He was convicted of espionage by Britain in 1950 for handing over the designs of the plutonium bomb to the Soviets, and has gone down in history as one of the most dangerous agents in American and British history. He put an end to America’s nuclear hegemony and single-handedly heated up the Cold War. But, was Klaus Fuchs really evil?

Please join us for a conversation with Nancy Thorndike Greenspan on her newly published book, Atomic Spy: The Dark Lives of Klaus Fuchs which interrogates the remarkably complex life of Klaus Fuchs.


This is a free program but you must register in advance through the Columbia Club at: https://dc.alumni.columbia.edu/klausfuchs then go to Atomac Spy

Emily S. Dietsch '06 of Brown University will moderate this conversation, which will touch on the renewed relevance of Cold War paradigms, and invite questions about moral ambiguity to move us away from traditional, simplistic histories that paint the era in black and white. The dynamic conversation will include time for engagement with attendees via live Q&A.

REGISTRATION: All attendees must register here: https://dc.alumni.columbia.edu/klausfuchs then go to Atomic Spy

Nancy Thorndike Greenspan began her adult life as a health economist but soon began a writing career as the co-author of four books with her husband, the late child psychiatrist Stanley Greenspan. She is the author of two biographies, The End of the Certain World: The Life and Science of Max Born (Basic Books, 2005) and the recently published Atomic Spy: The Dark Lives of Klaus Fuchs (Viking, May 2020). She has served on the board of numerous environmental organizations and is now a board member of the American Institute of Physics Foundation. An ice dancer, she spends her free time at the rink (whenever it re-opens). She lives in Bethesda, Maryland.

Emily S. Dietsch is an Academic Consultant based in Washington, DC. She studied the History of Art and Architecture and American Studies at Brown University before pursuing doctoral work in the same fields at GWU. In particular, her scholarship focuses on matters of identity and social movements that the Cold War ushered into being, particularly among marginalized populations. She serves as Communications Chair for BCDC, as Managing Director for the Atlantic Black Box Project, and on the Steering Committee of the Center for the Study of Slavery and Justice.