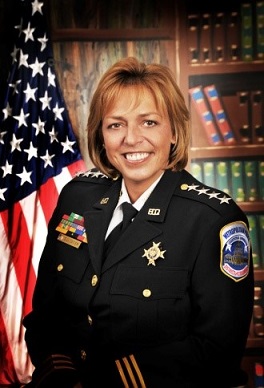 Join us as we recognize Cathy Lanier, Senior VP of Security for the NFL and former DC Chief of Police for her distinguished career in public service

The Public Service Award Luncheon is the Harvard Club's flagship event of the year. If you can attend just one event in 2017, please join us on Wednesday, May 24, 2017 from 12:00-2:00 pm at the Willard InterContinental Hotel, where Ms. Lanier will be presented with the 2017 Public Service Award.  The Harvard Club thanks the Washington Redskins for their generosity and event sponsorship.

Remarks by Cathy L. Lanier, former Chief of Police of the Metropolitan Police Department of the District of Columbia

Cathy Lanier  was hired as the Senior Vice President of Security for the National Football League (NFL) in September 2016.  In this capacity, Ms. Lanier oversees all security operations for the League to include investigative affairs, compliance with the Federal government’s SAFETY Act, and NFL venue, fan, player, staff and infrastructure security for all 32 clubs.

After assuming the leadership of the Metropolitan Police Department in January of 2007, she was unanimously confirmed as the Chief of Police in April 2007 and held that position for 10 years.

Ms. Lanier was a member of the Harvard Kennedy School Executive Session on Policing and Public Safety from 2008-2011.  She is a graduate of the FBI National Academy and the Federal Drug Enforcement Administration’s Drug Unit Commanders Academy.  She holds Bachelor's and Master’s Degrees in Management from Johns Hopkins University, and a Master's Degree in National Security Studies from the Naval Postgraduate School in Monterey, California.  She is certified at the technician level in Hazardous Materials Operations.

A History of the Harvard Club's Public Service Award

The Harvard Club of Washington, DC, awarded the first Public Service Award (PSA) in 2000, in memory of the late Elliot L. Richardson AB ’40, LLB ’47, LLD ’72, someone who exemplified public service. The award is presented annually to an individual who has attended or been affiliated with Harvard University, who has made significant contributions to the public good, and whose service has at least in part been focused on the Washington, DC, area.  Previous recipients have included former Secretary of Health and Human Services Sylvia Mathews Burwell AB '87, former Secretary of Labor Thomas E. Perez, JD '87, MPP '87, and U.S. Supreme Court Justice Ruth Bader Ginsburg.

Please call Caren Pauley at 202-337-1300 or email her at caren@harvard-dc.org for registration assistance.