[VIRTUAL] A Second Reckoning: Race, Injustice, and the Last Hanging in Annapolis

A Second Reckoning uses John Snowden's murder case to bring posthumous pardons into the national conversation about amends for past racial injustices. 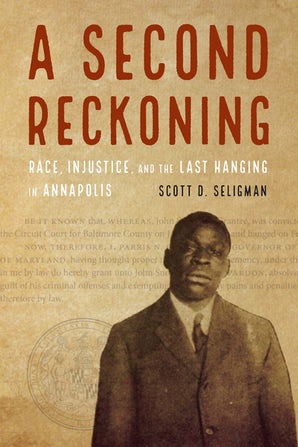 A Second Reckoning tells the story of John Snowden, a Black man accused of the murder of a pregnant white woman in Annapolis, Maryland, in 1917. He refused to confess despite undergoing torture, was tried—through legal shenanigans—by an all-white jury, and was found guilty on circumstantial evidence and sentenced to death. Despite hair-raising, last-minute appeals to spare his life, Snowden was hanged for the crime. But decades after his death, thanks to tireless efforts by interested citizens and family members who believed him a victim of a “legal lynching,” Snowden was pardoned posthumously by the governor of Maryland in 2001.

A Second Reckoning uses Snowden’s case to bring posthumous pardons into the national conversation about amends for past racial injustices. Scott D. Seligman argues that the repeal of racist laws and policies must be augmented by reckoning with America’s judicial past, especially in cases in which prejudice may have tainted procedures or perverted verdicts, evidence of bias survives, and a constituency exists for a second look. Seligman illustrates the profound effects such acts of clemency have on the living and ends with a siren call for a reexamination of such cases on the national level by the Department of Justice, which officially refuses to consider them.


Scott D. Seligman is a historian, retired corporate executive, and career China hand, and he holds degrees from Princeton and Harvard. Fluent in Mandarin and conversant in Cantonese, he lived in Taiwan, Hong Kong, and China and has worked as a legislative assistant in Congress, a businessman in China, and a communications director of a Fortune 50 company. He is the author of many scholarly and business books, including Chinese Business Etiquette and The First Chinese American. He has published articles in the Asian Wall Street Journal, The Washington Post, the Seattle Times, the China Business Review, the Jewish Daily Forward, China Heritage Quarterly, and the New York History and Smithsonian Asian Pacific American Center blogs.

BIW Members and their guests: Free