VERITAS:  A Harvard Professor, A Con Man and the Gospel of Jesus's Wife

Investigative  journalist Ariel Sabar discusses his highly acclaimed new book on a bizarre hoax that engulfed Harvard Divinity School. As the author is a graduate of Brown University, the members of the  Brown Club of DC will be joining us.

In 2012, Dr. Karen King, a star professor at Harvard Divinity School, announced a bombshell discovery at a scholarly conference just steps from the Vatican: She had found an ancient fragment of papyrus in which Jesus calls Mary Magdalene “my wife.” The tattered manuscript made international headlines, including the front pages of The Boston Globe and The New York Times. If early Christians believed Jesus was married, it would upend the 2,000-year history of the world's predominant faith, threatening not just the celibate, all-male priesthood but sacred teachings on marriage, sex and women's leadership. But as award-winning journalist Ariel Sabar would discover in his reporting for The Atlantic and his new book Veritas, the Gospel of Jesus’s Wife was a brilliant hoax that forced an extraordinary reckoning with the nature of truth and the line between reason and faith. 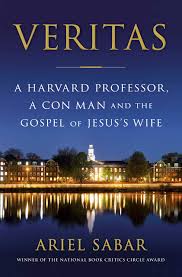 Ariel Sabar won the National Book Critics Circle Award for his debut book, My Father's Paradise: A Son's Search for his Jewish Past in Kurdish Iraq (2008). His second book, Heart of the City (2011), was called a "beguiling romp" (New York Times) and an "engaging, moving and lively read" (Toronto Star). His Kindle Single, The Outsider: The Life and Times of Roger Barker (2014), was a best-selling nonfiction short.

​Ariel is also an award-winning journalist whose work has appeared in The New York Times, The Atlantic, Smithsonian Magazine, Harper's, The Washington Post, The Wall Street Journal, The Boston Globe, Mother Jones, Washingtonian Magazine, and This American Life. He got his start at LA Weekly, where he spent summers as a college intern, and later worked as a staff writer at the Providence Journal, Baltimore Sun, and Christian Science Monitor, where he covered the 2008 presidential campaigns. He has reported from Africa, Europe, Scandinavia, and the Middle East.

Order a copy of Veritas from Bookshop.org, which supports local, independent bookstores.