A conversation on Reconstruction-era white-supremacist terrorism in the U.S. South, and its continuing relevance today, with noted Washington Post editorial writer and columnist Charles Lane. 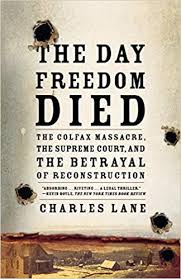 CHARLES LANE is a member of The Washington Post editorial board and a columnist for the paper’s op-ed page. A finalist for the 2009 Pulitzer Prize in editorial writing, he was formerly the Post’s correspondent at the Supreme Court for six years. He is the author of The Day Freedom Died: The Colfax Massacre, the Supreme Court and the Betrayal of Reconstruction, a history of racial violence in the post-Civil War South, described by The New York Times as a “riveting . . . legal thriller” and Freedom’s Detective, a biography of an early U.S. Secret Service chief, which NPR praised as “a captivating account of a flawed but remarkable man.”

A former editor of The New Republic, where his decisive action against the journalistic fraud of Stephen Glass became the subject of the 2003 film Shattered Glass, Mr. Lane has also worked as a writer and foreign correspondent for Newsweek, covering civil wars in the former Yugoslavia and Central America during the 1980s and 1990s. His writing has also appeared in Foreign Affairs, Foreign Policy, The New York Review of Books, and The Atlantic, among many other publications. He is a frequent commentator on television and radio.

Mr. Lane has taught journalism as a Ferris Professor at Princeton University and as a lecturer in English at Georgetown University. In 2009, he studied and lectured at the American Academy in Berlin, Germany as a Bosch Public Policy Fellow. He studied law at Yale as a Knight Foundation Fellow and received a master of studies degree from that institution in 1997. He graduated Phi Beta Kappa from Harvard in 1983. Mr. Lane lives in the Washington, D.C. area.